Sona’s faculty the best in the country, says NPTEL 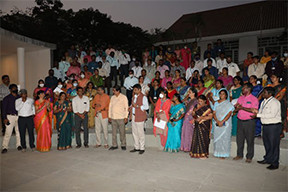 The National Programme on Technology Enhanced Learning (NPTEL) is a project funded by MHRD, Government of India. The project was initiated by seven Indian Institutes of Technology (Bombay, Delhi, Kanpur, Kharagpur, Madras, Guwahati and Roorkee) along with the Indian Institute of Science, Bangalore in 2003. The main objective of the project is to offer a high quality web based course on various engineering disciplines and core science for the students, faculties and industry persons.

With the implementation of the project, NPTEL enables the participants to obtain certificates which mold them to be employable in the industry or pursue a suitable higher education programme.

NPTEL is offering the online courses with a timeline of 4, 8-, or 12-weeks through an online portal. All the courses are relevant to students in all years of higher education along with basic core courses in sciences and humanities with exposure to relevant tools and technologies, are being offered. The enrolment to and learning from these courses involves no cost. Following these online courses, If someone wants to get a certificate from the IITs/IISc after doing the course, he/she should register for the in-person proctored certification exam that is conducted in about 100 cities across India in collaboration with an exam partner. The certification exam is not free but has a nominal fee of Rs 1100. Final score=25% assignment score + 75% exam score. To be eligible for a certificate, the learner should have scored >=40% final score. E-verifiable certificates are made available on nptel.ac.in/noc and hard copies are also dispatched to the candidates.

NPTEL has introduced a new category of award ‘LC STARS’ for recognizing the performance of a Local Chapter over a period of the last 8 semesters in NPTEL examinations. If an LC performs consistently and is in the top 100 in the LC Rating list for 8 times, NPTEL will be identifying such LC as an LC STARS. For the timespan 2017-20, NPTEL has shortlisted only 16 colleges in all over India which satisfies the norms for this category of award. Our SONA NPTEL LC has secured 9 th position for its consistent performance in NPTEL examination during 2017-2020.

SONA COLLEGE OF TECHNOLOGY has secured a FIRST POSITION in the FACULTY PERFORMANCE rating given by NPTEL among the 5130 NPTEL Local Chapters in all over India during July-Dec 2022 examinations. SONA is proud to announce that it is the FIRST COLLEGE to bag the FIRST POSITION in faculty performance rating for the 3rd time.
SONA NPTEL LOCAL CHAPTER has secured 17th Rank (“ AA” rating) in NPTEL examinations held during July-Dec 2022 among 5130 Colleges in all over India. SONA NPTEL LOCAL CHAPTER is secured a 2nd POSITION in the rating given by NPTEL among all the NPTEL Local Chapters of Tamilnadu engineering colleges Also, SONA NPTEL LOCAL CHAPTER is bagging the prestigious “AA” category award for the 8th time.