ACE, Association of Civil Engineering of Sona College of Technology was inaugurated on 29th July, 2016 in PG auditorium at  Sona College of Technology in the august Presence of Sri .C.Sivagnanaselvam, CEO & Founder, CS & Associates(P) Ltd., Salem. The event commenced with the prayer song bringing in the blessing of almighty inside the hall and the hearts of the participants. Secondly Dr.R.Malathy, HoD of Civil Department and the PG DEAN invited the gathering. The staff co-ordinators Mr.K.Prakash,&Ms.N.Savitha, Asst. Professors, Dept of Civil Engineering introduced the office bearers of the association. Mr.Hari Prasad,the Student Chairman came out with his entire activity plan for the year 2016-17. Dr.M.Usha, The Principal, Sona College of Technology gave away the presidential address. The student secretary, Mr.K.Gopinath introduced the Guest of Honour Er.C.Sivagnanaselvam with his encouraging profile. The special address was given by the Chief Guest Er.C.Sivagnanaselvam about the job availabilities in the field of Civil Engineering. He said that there is major demand in the field of service in the Civil Engineering pace. He also put-forth some of the service fields such as Fire resistance service, plumbing service, electrical service etc., His speech was so inspiring that we all moved by it as the time went on. Atlast he said that for a successful civil engineer, common sense is the most important parameter rather than hard work. He also showed us the powerpoint presentation on the on-going and completed projects of his own company started with a Capital of Rs.500 and now marking a total estimated value of around 2800 crores. Dr.S.Suresh, Professor, Dept of Civil engineering gave the guest of honour, a felicitation of his own kind and made us into a joyous mood. Finally the event came to the end with showing some of the gratitude by Ms.B.Sivasankari, Vice-Chairman, ACE providing her valuable vote of thanks to the gathering and the Dignitaries. 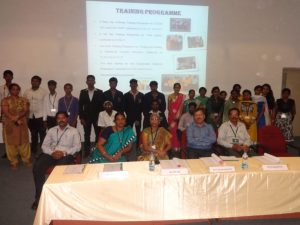